お見積り・お問い合わせ
The XP Media and CloneMedia for Mouse Hybridoma Generation is a complete solution that supports all stages of hybridoma cell line development from fusion to scale up. Optimized to support the selection and growth of hybridoma clones using the Molecular Devices ClonePix systems, the kit is also compatible with other appropriate methods.


Our XP Media and CloneMedia Complete Kit for Mouse Hybridoma Generation (P/N K8861) is composed of the following components. All components can be sold separately.

XP Media and CloneMedia have been optimized for stable antibody production

Figure 1:(A) Five individual hybridoma fusion experiments were conducted on BALB/c mice, immunized to the same antigen, to assess reproductibility of fusions in XP Media suite of products. Fusion efficiency was calculated by dividing the number of hybridoma colonies detected on the ClonePix 2 System by the number of splenocytes grown in XP Media Pre-Fusion Myeloma Growth Medium and Hybridoma Expansion Medium (without HT). (B) Images of hybridomas were captured with the ClonePix 2 System in white light (left panel) and FITC (right panel), after 7 days growth, to determine growth and expression of IgGs, respectively. Colonies grown in the presence of CloenDetect were ranked according to their FITC intensity (indicating total IgG production), with the highest producers picked for further characterization. (C) Software detection of cell confluency, indicated by the green overlay, across a 96-well plate allowing for a quick visualization of plating efficiency. 87 out of 96 wells grew to a confluency >5% after 7 days (the initial confluency of all wells was <1%) for a >90% plating effiency. (D) IgG production plotted per well (shown in blue) with red lines indicating 2 s.d. away from the mean. Because these are stable hybridomas, we don’t expect a large variation in the total amount of IgG produced per cell, which is confirmed by <5% CV across all clones tested.

Superior viability and growth of hybridomas in CloneMedia semi-solid media

Figure 2:(A) Hybridomas were plated in CloneMedia semi-solid media from Molecular Devices and in semi-solid media from Competitor X. A greater number of clones were able to grow in CloneMedia when compared to Product X as shown in the white light images taken of colonies on the ClonePix 2 System. (B) Hybridoma viability was calculated by dividing the number of colonies detected by the initial seeding density. Hybridomas were more viable in CloneMedia than in Product X. (C) This was further confirmed by comparing the average colony size in both media.

Optimal growth and antibody production of hybridomas in liquid media

Figure 3:(A) Hybridomas grown in XP Media grew 2X as fast as Product X but did not suffer from a reduction in antibody production due to enhanced growth, as shown in (B).

Workflow for antibody discovery in hybridomas

The traditional approach to generating monoclonal antibody-producing cells (i.e. hybridomas) is to fuse myeloma cells with desired antibody-producing splenocytes (e.g. B cells). These B cells are typically sourced from animals, usually mice. Following cell fusion, large numbers of clones are screened and selected on the basis of antigen specificity and immunoglobulin class. Once candidate cell line clones are identified, each “hit” is re-confirmed, validated, and characterized using a variety of downstream functional assays. Once completed, the clones are expanded or scaled up where additional downstream bioprocesses occur.

Here we provide a general overview of the hybridoma workflow showing where our XP Media and CloneMedia would be used in this hybridoma generation and scale-up process. 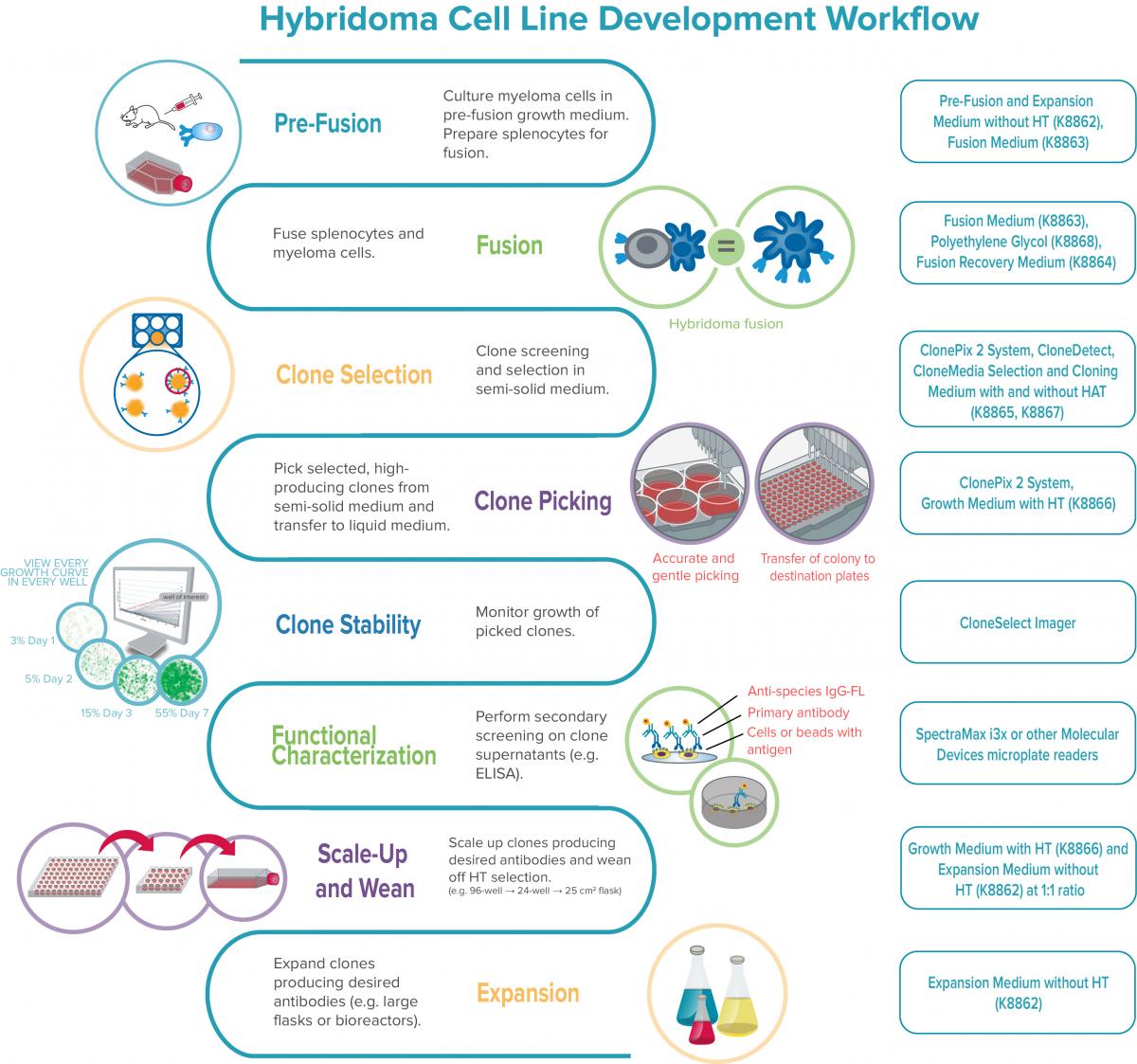